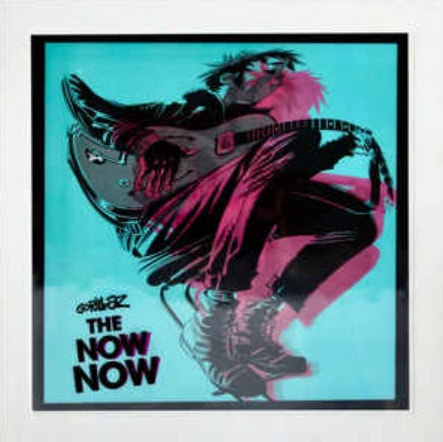 The Now Now is the sixth album produced by the band Gorillaz and was released June 29th 2018. It contains 11 songs, each about 3-5 minutes long.
The most popular songs within this album are “Humility (Ft. George Benson)” and ''Tranz” and their least popular songs being “Idaho” and “One Percent.” This album contains a variety in sounds, and can go from beach-like to synth from song to song.
I recommend this album if you like the traditional Gorillaz vibe combined with a twist of new sounds. Overall I rate The Now Now a 4 out of 5 stars.

Animal Crossing: A Game That Helps You Get Away

Animal Crossing: New Horizons is a life simulation game published and developed by Nintendo for the Nintendo Switch. It was released on March 20th, 2020 and it is the fifth main game in the series. In this article, I will be giving my opinion on it and explain the sound, graphics, gameplay, and story.
The sound in Animal Crossing: New Horizons is very structured. The villagers in the game have their own language called Animalese. The player’s mailbox in the game makes a beeping sound when there is mail. There are stereos in the game that can play songs. Some bugs in the game make sounds too. The player can obtain a lot of different reactions from villagers, like the shock reaction which makes a piano crashing sound. Some of the furniture in the game can make sounds too.
The graphics in New Horizons has changed a lot from the other games in the series. In the first Animal Crossing game, the character was short and their hat couldn’t be taken off. Over time, the character got taller, the hat could be taken off, and hairstyle was able to be changed. The houses were able to be expanded in the other games. In New Horizons, you are able to choose your skin color, eye color, hairstyle, hair color, etc. This couldn’t be done in the other games.
In Animal Crossing, the player is a human and moves into a rural village populated by anthropomorphic animals. Once you have made your character and named your town, you can start playing. In New Horizons, the feature to put furniture outside was added. Terraforming, crafting, the ability to move buildings, customization, fencing, a couple of new flowers (mums, hyacinths, and windflowers), and 8 new villagers were also added.


The story of Animal Crossing: New Horizons follows a villager customized by the player, who purchases a getaway package from Tom Nook and moves into a deserted island. After the player obtains the tent, then they can start playing. This game has no time limit and you can stop playing whenever you want.
In my opinion, this game is amazing and you can spend all day playing it. I would rate this game a 10/10. I would highly recommend this game to everyone. The villagers are always doing something everyday. Overall, Animal Crossing: New Horizons is a great game and there is always something different happening every day.

Creativity. It is all over the world, making a change. Have you ever taken a second to look around you and ask yourself, what would the world be without color? I have, and I came to the conclusion that the world would be boring and plain without color. Liz Miller, Curator of the Franklin G. Burroughs - Simeon B. Chapin Art Museum in Myrtle Beach was delightful enough to answer some questions I had in mind about their artwork, let’s see what they had to say ahead.

What is your most favorite thing about working in a museum?
“Actually there are a few things that make working in a museum setting so special.  First, of course, in my current situation, is being surrounded by art. Over the years, I’ve had the pleasure of working with many, many artists working in different visual arts media – from works on paper to fabric and from sculpture to photography.  When I worked at the Penn Museum of Archaeology and Anthropology, I had the unique experience of working with artifacts and antiquities from across centuries and the world.  Museum work provides these special opportunities.  Museum work also provides the opportunity to work with not only artists, historians, researchers, writers and educators but also with like-minded museum professionals.”


What is your most favorite art piece in this museum?
“The Art Museum of Myrtle Beach specializes in exhibiting and collecting Southern Contemporary Art.  We feature approximately 12 visual arts exhibitions each and every year, and we have a Permanent Collection which includes four separate categories of art.  The Bishop Collection of Antique Maps and Prints, the Waccamaw Arts & Crafts Guild Collection, the Burgess-Dinkelspiel Collection of Southern Art and the Museum’s Collection.  Included in the Burgess-Dinkelspiel Collection are 21 works of art by esteemed South Carolina artist Jonathan Green.  While we cannot always display works from the Museum’s Permanent Collections, I certainly do have my favorite works in each.  I am very proud of the Jonathan Green works as they represent the second largest collection of Jonathan Green’s art in the country, with only the Morris Museum of Art in August, GA, having more.  Although Jonathan is known for his large, colorful iconic paintings, my favorite is a small painting entitled The Gnostic.”

If you could, would you change anything?
“The Art Museum’s building is an architectural treasure here in Myrtle Beach:  a beach house built in 1924 about eight miles north of our current location.  The building was moved in 1984 to 3100 South Ocean Boulevard.   By 1997, the addition was complete and all the renovations made, the Art Museum opened to the public in 1997.  Although our space is charming and provides an up-close-and-personal experience for visitors, I have to admit that I would very much like more space!  And that space would include gallery space, storage space and event space.”

What is the most interesting art piece that visitors like the most?
“As mentioned above, we feature 12 exhibitions each year so no one piece is on view at all times. Visitors always enjoy seeing the antique maps, and they also enjoy seeing the art of Jonathan Green.”

What is the rarest art piece you have in this museum?
“As mentioned above, the Art Museum of Myrtle Beach owns the second largest collection of art by Jonathan Green.  We also own four Barbizon School paintings which were given to the Art Museum by a member of the Chapin Family.”

What made you want to work in a museum?
“I was fortunate to grow up in a near suburb of Philadelphia, PA – a city rich in culture with several museums.  I visited many of these museums as often as I could.  By the time I reached my 20s, I knew that I wanted to work for a cultural organization.  I was temporarily side tracked with an amazing opportunity to work for an award-winning city magazine.  My experience in publishing certainly helped when the transition into museum work.”

Are you yourself an artist?
“No, I am not an artist nor an art historian.  I am, in my own small way, an art collector.
I enjoy being surrounded by the beauty of art both at work and at home.”

What has been your worst experience thus far?
“In March 2020, when the Covid 19 Pandemic hit all of us, my worst experience started that very first day.  As a small art museum in a tourist town, having to close our doors, cancel classes and fundraising events, re-work our exhibition schedule and try very hard not to lay off staff – that was difficult.  Plus, as time went by, research indicated that one in three cultural organizations would have to close their doors permanently due to the pandemic.  However, our Museum tightened our belt, reworked our schedules, sought out new sources of revenue, put our Museum Shop online, almost immediately offered virtual classes for children and thoroughly researched health and safety mandates in order to open.  We were actually able to re-open in just three months or in the middle of June 2020.  It was an extremely difficult time; however, it did show us that by working together as a staff and board and with the support of our members and donors, we could – and did – not only survive but continue to offer great art and great experiences to all of our resident and tourist visitors.”

Masked Dancer: concern in so many things you forget where you are (2009, self-released)


This album tells the story of being overwhelmed with the responsibility of growing up.
The album is very complex lyrically and instrumentally with a wide variety of instruments being used. The album can go from very fast chaotic to slow melancholic in a matter of seconds, but still remains powerful all the way through.


The album maintains the overbearing feeling of bliss and anxiety. Between the track “born again so many times you forget you are” and it’s themes of wanting to return to the simpler times of childhood, and “underground” comparing the feeling of being emotionally detached to being buried underground, it is clear this album had a lot of passion put into it.

I highly recommend this album to anyone who is looking for new indie artists, Its a breath of fresh air hearing such an inventive style. I give this album 5 stars because it is a powerful work.

Movie Review: Inside Out

​Inside out
The heart touching animation was released in 2017, directed by Pete Docter. It's all about an 11 year old girl, Riley Anderson (played by Kaitlyn Dias), a life changing move from minnesota. The film begins with introducing the 5 emotions, first Joy, then Sadness, Fear, Disgust, and Anger. These 5 emotions are key to how Riley reacts to different situations.The plot is set up in such an exciting manner, you never know what to expect next.

Something  would change about the film at the beginning. It doesn't get to the first major event in the plot till about 20 minutes in. I Believe the beginning should be the hook, not something to bore people away with its tedious story line. If I were to be the producer of Inside out, I would have jumped to the point in the first 10 minutes.

Create your own unique website with customizable templates.
Photo used under Creative Commons from wuestenigel